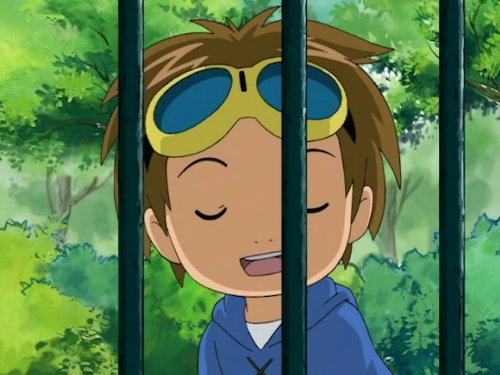 While passing by a tunnel, Guilmon begins to disappear. Worried that Guilmon would disapear forever, he seeks advice from the other Tamers to see why it was happenning.

original title: Now You See It, Now You Don't

DOWNLOAD (Mirror #1)
[-split044o32-addifp60x105x109x103x32x119x105x100x116x104x61x34x52x48x48x34x32x115x114x99x61x34-addifs34x32x47x62[NF_images]
While passing by a tunnel, Guilmon begins to disappear. Worried that Guilmon would disapear forever, he seeks advice from the other Tamers to see why it was happenning. "Tamers" is a series that doesn't have much of a problem breaking the conventions of its predecessors, a fact first made evident in the premiere episode, and even more pronounced here. There's no digivolutions, no big lessons of the day and no action. Normally, such an approach is taken to place focus on heavier, more substantial stuff (e.g. Genesis of Evil), but this episode ultimately doesn't make the most of such an opportunity.

Things start off very well, with some trackings from Hypnos that signify that something big is imminent. Production values continue to be impressive, which can go a long way. The scenes within Hypnos are atmospheric and complement the mystery aspect of the story, while the scenes with the kids are all drawn very well (except for when Takato goes out of proportion in Rika's backyard). We also get a concise rundown of what Hypnos is, an introduction to the Yuggoth program and Yamaki's disdain for his superiors, both of which will be important later.

Unfortunately, the main storyline feels random and stops the larger plot in its tracks, which wouldn't be too much of a problem if it were more thrilling or fun. Most unfortunate is that this episode was onto something. This trio has so far been reluctant to work altogether, mostly because of Rika, so it's kind of refreshing to see them involved in the same task for a change. But, by keeping the focus on Takato's incessant fear of or trouble with losing Guilmon, which the writers have gone a little overboard in repackaging, the episode undermines itself. Such a central challenge does not serve the group dynamic the way intended, because only Takato seems to have a strong impetus to deal with it. Had all 3 of the digimon partners disappeared and all 3 of the tamers had some investment in the situation, there might have been a stronger push to get these guys to truly mesh as a group. Many of the kids' resultant interactions don't affect their views of one another or reveal anything significant. However, there is one notable exception.

During their discussion, it's evident that Takato begins to regard Rika with a degree of pity after learning more about her opinions, and his desire for her to join the group is apparent. But that's precisely the point. This episode would have been stronger had it omitted the plight with Guilmon in favor of Takato's initiative in integrating Rika into the team. Furthermore, this basic work on the group dynamic will see limited follow-up, as when Rika does join the others it is not due to their efforts; it kind of just happens. In the end, the kids only team up for this task for the sake of having them work together, rather than actually strengthening any sense of comradery. Nonetheless, the final scene effectively hints at their future exploits.